I’ve been bragging to people back home for some time now about the wonders of Japanese convenience stores so its about time I do a post already. I think because convenience stores in The States are almost always connected to gas stations they have a fairly gritty image – but in Japan they always stand alone. Open 24 hours (generally), squeaky clean, filled daily with fresh meals, any kind of alcohol you want, and a constant rotatation of new seasonal foods, toys, prizes and the like, Seven Eleven (7-eleven in the U.S.) in Japan seriously is convenient. I can’t even tell you how many times my friends and I have forgone eating out to just get a cheap meal from here.

This one is in Kichijoji.

Nozomi turned bright red when I took this. I think its pretty interesting that half of them are anime.

Ok, I’m just being funny by only taking a picture of these magazines, but when you enter there is usually a whole wall of magazines. Seven Eleven is kind of stingy about this and often seals their magazines (esp. these kind – adults only!), but in most convenience stores you can come in, read and entire fashion magazine, for example, and walk out without buying it. 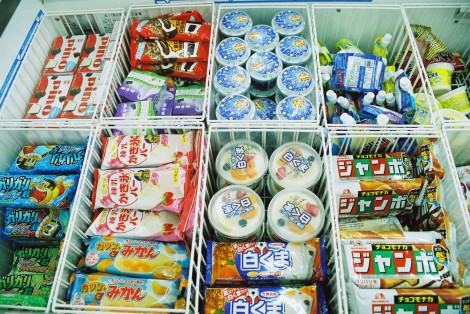 The frozen dessert case is my new favorite section because of this unbearable heat (maybe its just the humidity that bothers me). My favorite is the one on the bottom middle (白くま）- its full of fruit and azuki beans. Others include a waffle filled with vanilla ice cream and chocolate, orange, grape, soda, royal milk tea, and cherry popsicles.

Make-up, panty-hose, dental care products, sunscreen, and the like. I heard recently that a few 7-elevens in Japan are going to become pharmacies as well -so long mom & pop drug stores!

The great thing about Japan (esp. for those exhausted salarymen) is that you can drink in public. Grab a beer at the conbini and drink it while you’re waiting for that packed train home. On the left side of this case are all the beers – almost all Asahi brand, and on the right are “Chu High” – these are kind of like canned cocktails – shochu and soda in various flavors. 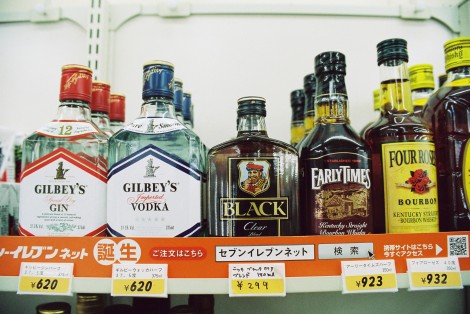 You can buy just about any variety of alcohol here. Below this shelf they also have liter and 2 liter sized cartons of sake and sho chu for $10-20. If you’re curious about the prices in this photo, just move the decimal two points to the left to get an idea of the dollar amount – the exchange rate is 100yen to $1.06 right now.

This is what I’ll miss. On the left, bentos of everything you can imagine – pasta, omuraisu (omelette rice), chicken katsu, various donburi, typical style bento with rice, fish, vegetables, all kinds of noodles – soba, ramen, somen (hot or cold), salads, side salads. On the right – onigiri heaven. Rice balls (maybe they should be called rice triangles?) with fillings like salmon, tuna, seaweed, curry, korean style bulgogi, sour plum, all wrapped in seaweed, or made of fried rice, or wrapped in egg and spam, or mixed with furikake (seaweed/salt seasoning) – basically anything you can think of. I think I could live off of these. I can’t explain how incredibly enjoyable they are.

No crust on these sandwiches. Flavors above are, from left to right: Ham & Cucumber salad (I think), Ham Katsu (katsu= breaded and fried), Chicken Katsu, Looks like fried egg, ham, and lettuce, Tuna and Egg (half and half), and Lettuce (its called “Lettuce” but it obviously has other stuff too).

Notice: the pokemon stuffed animals and action figures for sale, the microwaves they will heat up your bento or noodles in, the hot water machines for heating your cup noodles or tea, and the awesome uniforms.

What do you think of the tour? Thoughts? Questions? Disagree with me on anything? For a related post – check on Ben’s guest post about working at Family Mart from a few months ago.